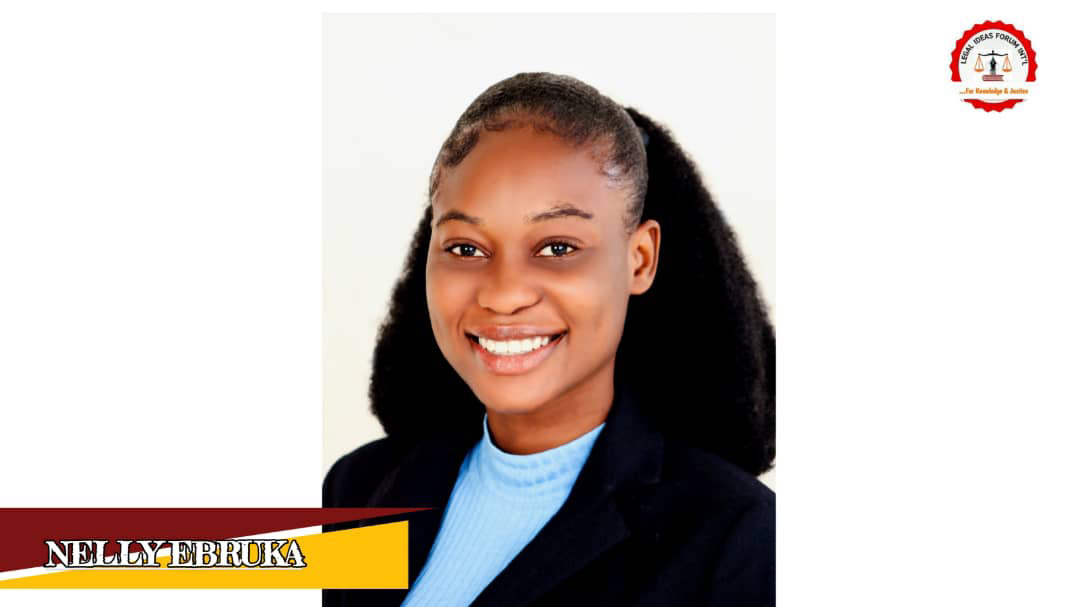 As often said, when men reached for the stars, lawyers reached for their books. After Yuri Gagarin’s historic space flight in 1957, the international community through the United Nations deemed it pertinent to agree on certain principles and rules to regulate outer space affairs. Space exploration undoubtedly brought new ideas in the development of various fields like science, medicine, media and communications, etc. and of course legal lacuna had to be filled.
An appreciable number of international documents have been adopted since then to regulate all space related activities of states, corporations and individuals thereby structuring a legal order for outer space including the moon, and celestial bodies such as planets and asteroids. As countries began placing objects in space, different concepts and principles became expedient to avoid anarchy in humankind’s operation in outer space and this today, forms the corpus juris of space law. The end result of this mutual understanding between the space faring countries of that era was the Outer Space Treaty of 1967 which gave birth to modern international space law as we know it. The outer space treaty was open to signing by all states in Moscow, London, and Washington DC.It became effective and operable on October 10,1967.
Space law in a nutshell is a set of rules regulating the legal relations between people and between states in outer space. It primarily concerns the legal regulation of the order in outer space, and the rules of both international and national law are being implied in this context. A Hungarian legal expert, Dr.Gyula Gal ,defines space law broadly as “a set oflegal rules regulating the intra- and inter-state relations that arise in exploring and using outer space and celestial bodies (space activities), and the legal rules covering the consequences of such activities from the standpoint of the rights of individuals.”It is worthy to note that it is a multidisciplinary/transdisciplinary field of law involving commercial law, International law, environmental law, armed conflict,  intellectual property and security rights amongst others. In terms of its scope, this field of law addresses diverse issues such as the militarisation of space, liability for any damage of a space object, protection of the space environment, as well as the rescue of astronauts. Primarily, there are five major treaties that regulate space activities: the Outer Space Treaty , the Rescue Agreement, the Registration Convention, the Liability Convention and the Moon Agreement.
Nations in Africa support the global effort for the peaceful use of outer space and contribute to the growth of space law through the United Nations Committee on the Peaceful Use of Outer Space (COPUOS).In the past years, space faring and space emerging countries in Africa have considered it necessary to sign or ratify space related laws,notwithstanding the lack of technologicalcapacity to fully engage in space related activities. Nonetheless, the continent still has the highest number of countries that are yet to sign or ratify these treaties and there is also a paucity of national space policies and domesticated legislation governing space activities in African countries.
The Outer Space Treaty which is the fundamental treaty on space law was opened for signature on January 27, 1967, in the United States of America, the United Kingdom, and the Soviet Union and the treaty was entered into force on October 10, 1967. According to the  United Nations Office for Outer Space Affairs database. As of January 1, 2020, 110 countries globallyare parties to the treaty, with 19 of them being African countries; while another 23 have signed the treaty but have not completed ratification(with 10 out of which are African countries. It is the most widely considered space treaty in the continent being that 53 percent of countries in Africa have either signed or ratified the treaty.
In the table below, a list of the countries that are parties/signatories of the treaty are shown. Multiple dates represent the different days in which countries signed and submitted their deposition, which vary by location. It should be parenthetically noted that in the table, (L)stands for London, (M) for Moscow, and (W) for Washington, DC. Also the last column shows the method by which that state became a party, by way of signing the treaty and subsequent ratification and by accession to the treaty after it had closed for signature, .
Image 1 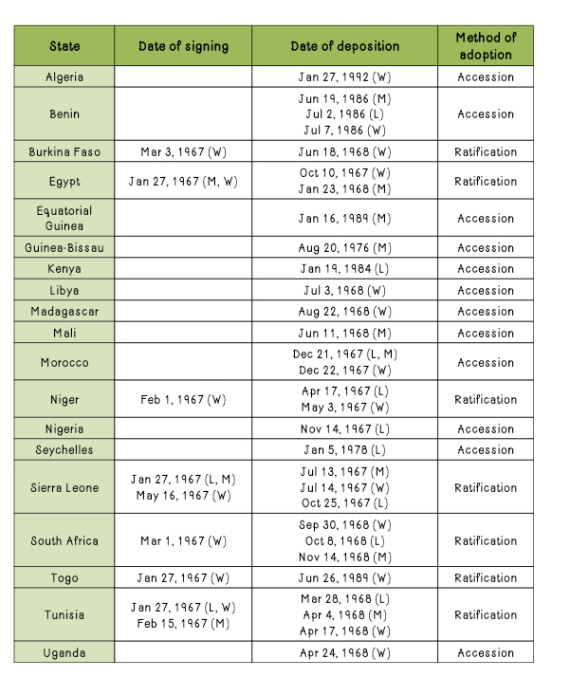 Ten African States have signed but not ratified the outer space treaty.
Image 2 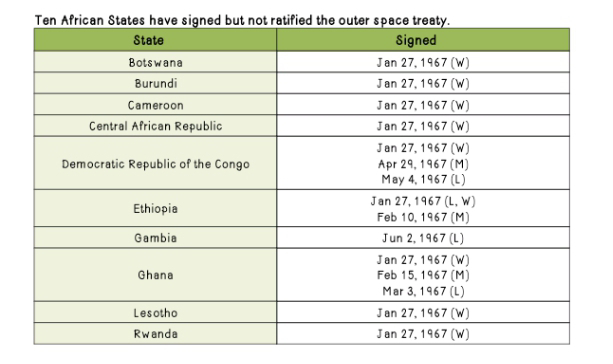 The Rescue Agreement.
The General Assembly of the United Nations on December 19, 1968 unanimously approved the Agreement on the Rescue of Astronauts, the Return of Astronauts and the Return of Objects Launched into Outer Space. It was opened for signing in Moscow, London, and Washington  D.C. on April 2, 1968 and became effective that same year .The Agreement became the second space law treaty to be adopted by countries. Its primary objective is to serve as an international instrument that outlines how persons and objects can be rescued should a mishap occur in outer space. As of January 1, 2020, only 16 African countries have ratified the Agreement.
The table below shows the African countries that are parties and non parties to the Rescue Agreement as of the January 1, 2020.R- signifies “Ratified”, while NR- Signifies “Not – Ratified”
Image 3

To conclude, space is a growing area of political and economic significance in Africa and the growing interest and number of States and non-State actors engaging in space affairs, makes it necessary for the adoption of space treaties by states. Additionally, national space policies are advised to serve as domestic guidelines for African countries in relation to space technology, especially considering the fact that international space policies-most of which are jus cogen in nature- are invariably binding on all States whether or not they are actively involved in the space sector. Africa so far has a fair record with regards to the domestication of international treaties, but there is still a need to fully promote space laws and policies in the continent through ratification of treaties by countries that are yet to do so and the formulation of domestic space regulation.
ABOUT THE AUTHOR
Nelly is an award winning law student, space enthusiast and young pan-African   leader with a dire passion for the legal aspect of space exploration and a desire to change the narratives of space science education in Nigeria and Africa. She is currently a team Member of Spacehub Africa, an organisation that is building the African space ecosystem and provides a platform for Africans to get involved in space. She won the award of best oralist in the African regional rounds of the Manfred Lachs Space Law Competition in Pretoria ,South Africa  and together with her team represented Africa and came Second Place at the World Finals of the Competition in Washington DC, United States of America in 2019’.In July 2020, She coached the University of Calabar , Nigeria Team to emerge as Runners Up of the 9th African rounds of the Competition, hence the best Participating Team from Nigeria. She is an elected prospective member of the international institute of space law, President of the Learn Space Foundation and is currently promoting the study of space policies and Space education in her immediate community.
Copyright Reserved
©2020
For knowledge and Justice

One thought on “African States and International Space Treaties. By Nelly Helen Ebruka”