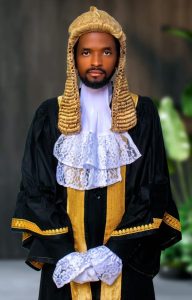 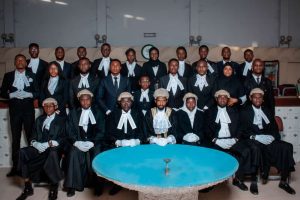 The Faculty of Law, Ahmadu Bello University, Zaria, has inaugurated its students judiciary, which consist of Courts of different hierarchy, ranging from Shari’a Court of Appeal, High Court, Court of Appeal and the Supreme Court. And also non-judicial officers and other distinguished senior members of the ABU Bar.

The inaugural ceremony held at the Faculty of Law, A.B.U. Moot Court, Kongo Campus on Monday the 23rd January, 2023. The event was blessed with the attendance of learned law teachers, law students of the faculty, other law faculties across the country, student leaders, president and many other dignitaries.

Mustapha Abubakar, an award-winning final year Law student emerged as the Chief Justice of ABU. Mr Abubakar, whom until his appointment, was Justice of the ABU Court of Appeal. He is a recipient of the following awards:
In 2019, Abubakar emerged as the best Advocate of Ahmadu Bello University, Zaria. Same year, advocacy took him to national level as he emerged the best and winner of the 2019 National LAWSAN moot competition. He was also announced best and winner of the NAMLAS Moot and Mock competition in 2019. In 2019, he also won Best Brief Writer, and Best Oralist Of The Clinical Legal Education (CLE) Annual Mock and Moot Championship. Mr Abubakar left the student Bar to the student Bench in 2020 as a Justice of Court of Appeal, where he received a Medal of Honour as a distinguished justice of the court in 2020.

The ABU Faculty of Law, ABU Zaria, is where the country’s most distinguished jurists and legal practitioners are bred. This of course explains why there is something unique about the ABU students’ judiciary. The Judiciary is the microcosm of the Nigerian Judiciary. The Courts are arranged from the Supreme Court down to the Sharia Court of Appeal.

The Supreme Court is headed by the ABU Chief Justice, who must be a final year Law student and must be knowledgeable in both procedural and substantive law. Other final year students are appointed as justices of the Supreme Court.

The High Court is headed by a Chief Judge of the High Court, and a Grand Khadi heads the Sharia Court of Appeal. Other judges and Kadis are appointed to aid the efficient learning of the law. The arrangement of the court helps students in the procedural and practical aspect of the law. This is because procedures might be similar but are different in all courts.