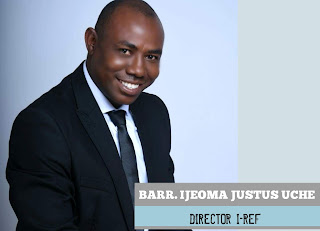 BEING THE TEXT OF A KEYNOTE SPEECH DELIVERED BY JUSTUS UCHE IJEOMA, ESQ., EXECUTIVE DIRECTOR, INTERNATIONAL HUMAN RIGHTS AND EQUITY DEFENSE FOUNDATION (I-REF) AT A COLLOQUIUM ORGANISED BY THE LEGAL IDEAS  FORUM INTERNATIONAL (LIFIN) ON THE 25TH OF MARCH, 2019 AT THE DENCA MOOT COURT OF THE CHUKWUEMEKA ODUMEGWU OJUKWU UNIVERSITY, IGBARIAM CAMPUS.
Protocols,
INTRODUCTION
“Human rights” is one topic that remains current and relevant at every point in our chequered history in Nigeria. Even as we grapple with the burden of grossly manipulated elections that have made us a laughing stock among the committee of nations, a keen observer will not need the aid of a binocular to be able to see the nexus between what is happening in the country and our human rights culture. Behind every act of impunity is a mindset that repudiates human rights. Wherever there is killing of innocent citizens, whether by state or non state actors, and the government looks the other way, know for sure that such government has a very scant regards for human rights. There is a relationship between bad governance, pervasive corruption, official ineptitude and lack of respect for human rights. It is my view that most of the ills that have become emblematic in our system today are direct manifestation of our lack of respect for human rights and unwillingness to enforce same when it is violated.
Therefore, there is no better time than now to begin to have a conversation around this all-important subject. I commend the leadership of LIFIN for finding it apposite to make this topic part of her program today.
Within the time allotted to us for this topic, we shall make effort to look at the topic under the following subheadings: what is human right?; what constitutes human rights violation; what are the roles of lawyers in the enforcement of fundamental human rights and; procedure for the enforcement of human rights in court, and then conclusion.
WHAT IS HUMAN RIGHT?
Human right has been defined by a lot of eminent scholars and jurists. According to Louis Henkin, it is: “those liberties, immunities, and benefits which by accepted contemporary values, all human beings should be able to claim as of right of the society in which they live” [1].
Professor Osita  Eze, defined human rights as, “demands or claims which individuals or groups make on society, some of which are protected by law and have become part of the lex leta while others remain aspirations to be attained in the future”.[2]
With greatest respect, these definitions did not go far enough. They failed to factor in some of the most fundamental characters of human rights: inalienability, universality and imprescriptibility. They are inalienable rights. That is they cannot be taken away from any individual without harming or violating such individual’s humanity. Human rights are inalienable because they are inseparable from the man, and they consist part of the existence of human being. Human rights cannot be subjected to the “accepted contemporary values” of any given society. Also, human rights are universal. I call it a common denominator to all men. It inures to all men irrespective of gender, race, creed or colour. Every member of the human community has these rights attached to them. The rights are inherent in man.
Furthermore, human rights are not just human rights because they are prescribed by laws or constitutions of nations. The constitutions or other codes mere declare it.
The foregoing thoughts accord with the views of other eminent scholars who have weighed in on the subject at one time or the other. Professor U. O. Umozurike definition is apt in this regards. He defined human rights as:
“claims, which are invariably supported by ethics and which should be supported by law, made on society, especially on its official managers, by individuals or groups on the basis of their humanity”.[3]
Our own Professor Osita Nnamani Ogbu explains that: “human rights are inherent in human beings simply because of their humanity, and have accordingly been defined as rights which are inherent in the human being. They are enjoyed by all human beings of global village and not gifts to be withdrawn or withheld or granted at someone’s whim or will. In this sense, they are said to be inalienable or imprescriptible. If you remove them from any human being, they will become less than human. They are part of the very nature of human beings, and attach to all human beings everywhere in all societies, just as much as do his arms and legs”[4]
The Supreme Court in the popular case of Ransome Kuti v. A G Federation[5], in its characteristic sagacity, stated thus:
“it is a right which stands above the ordinary laws of the land which in fact is antecedent to the political society itself. It is a primary condition to a civilized existence and what has been done by our constitution is to have these rights enshrined in the constitution so that the rights could be immutable”
From the above dictum of the Supreme Court, it is clear that fundamental rights inure to all persons. These rights are held highly sacrosanct and are jealously guarded and protected by the Constitution.
WHAT CONSTITUTES HUMAN RIGHTS VIOLATION
As there are so many human rights even so there are many acts that will constitute a breach of each right. What therefore, may constitute a violation of human rights depends on the right, which its violation is being complained of. The whole of Chapter IV of the Constitution of the Federal Republic of Nigeria, 1999 (as amended) set out the fundamental human rights, as under our current legal regime. 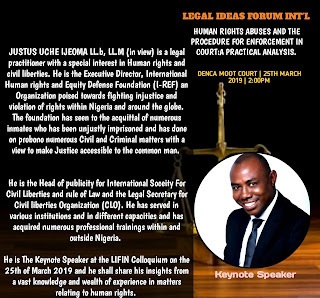