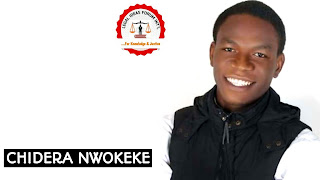 Chidera Nwokeke is a graduate of Law from Ebonyi State University, a law School candidate. He is academically motivated and has passion for research in several areas of law. He is a member of Amnesty International and a Fellow of Young African Leaders Initiative. He has a keen interest in dispute resolution, Litigation, Human Right and Corporate Law Practice. He can be reached at [email protected] or 08120945787.