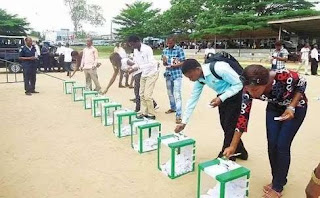 The Federal Republic of Nigeria is a sovereign state which practices strictly a constitution built solidly on the straightjacket rules that underscores the doctrine of democracy. Being the best form of government judging from the people’s preference, democracy is adopted by the Nigerian government, for the people were the major stake holders and sovereignty per se belongs to them from whom the government derives its powers and authority.

In a democratic government, one of its prime features as distinct from other forms of government is the change of government through regular elections. One of the prominent scholars in political science defined election as the process by which citizens choose their own chain. Chain in the sense that they choose how they want to be led,  considering the pros and cons involved. Simply put, Election, in civilized countries, means a democratic process in which eligible citizens exercise their franchise – the right to vote. They either oust an unpopular government out of power or relinquish their mandate to the sitting government by way of re-election without any influence or monetary inducement. The government by this means test their popularity and also augment if need be.

In recent time, it’s a do or die affair. In Nigeria precisely, It is either I remain in power or we all die here, and in other to execute this obnoxious and unscrupulous motive, they have devised means to monopolize power which is an aberration of democracy in entirety.

We have experienced many forms of election malpractices, ranging from gerrymandering, snatching of ballot boxes, rigging etc and to the most alarming issue of vote buying.

Vote buying is when a politician or political party induces an electorate with money or gift items in exchange for vote especially in the polling booth. In Nigeria, we claim to be strict adherents of democracy. However, we have only demonstrated same theoretically, neglecting unapologetically the practical appreciation of democracy. Proponents of democracy opine the view that for an election to be regarded as free and fair, “it means that those entitled to vote are rightly registered and totally free to make their choice of candidate without imposition, subjection, coercion of the will or inducement of any sort”. Not only in elections have we negated the tenets and principles of democracy, but also in some of the ugly activities that have taken place then and lately in the country.

What prompted this piece was the brazen experience I had during the last gubernatorial election in my home state, Anambra. People sold their votes as low as a thousand Naira note, partly under the supposed ignorance of the power of their votes. In my polling station, virtually all political parties in the gubernatorial race gave out money for votes. I condemned such by refusing the inducement, knowing fully well that it’s an electoral offence punishable under the law upon conviction to a maximum fine of N500, 000 or imprisonment for 12 months or both. I needed money but I knew it was not the ideal thing, after all, shall justice and equity be sacrificed on the pagan altar of illegality? No!

This issue rose to the climax at Ekiti state gubernatorial elections and I considered it as a tip of the iceberg of what we are about to experience in the 2019 general elections. The poverty and penury in the country is no reason that you should partake in such illegal business which the law frowns at. One thing that amazes me about this issue is that once you get involved in vote buying, morally, you lack the “locus standi” to criticize the government even in the wake of bad governance because as you make your bed, so must you lie on it, not on someone else’s.

So I call on all and sundry not to sale their votes for peanuts. If a politician can confidently stake thousands of naira to induce voters in his favour, certainly there’s something the voters don’t see these politicians see: unofficial privatization of public fund, self aggrandisement and scamming of the state polity. Nigerians should critically study the antecedents and manifestos  of each and everyone of the presidential aspirants contending for power and make an informed choice so that Nigeria would be restored back from its deplorable state to all-round  buoyancy.

This is a clarion call to right the wrongs of the past and engender even development Nigeria has long been deprived of. Let bygones be bygones! We don’t solely need the intervention of the INEC or Security agencies to achieve this precious motive because both has failed us. In polling stations, party agents monitor voters with the help of the INEC officials to ensure that those who collected money/material inducement actually complied. Voting cubicles are placed in a manner that enable party agents know the party in which the electorate voted for thereby violating the electoral principle of secrecy in voting of which the open secret ballot was adopted. And the security agencies are used to achieve this ill-fated exercise. Consequently, INEC should rise up to their defined responsibilities and avoid going cap in hands with politicians; this threatens the smooth practice of democracy. Equally, security agencies deployed to various polling booths should ward off all forms of electoral malpractices.